The Corporate Office located at 107 East Belding had humble beginnings in Hot Springs in 1978 as an independent plumbing company. But the story really begins long before that...
The Sanders family is very proud of all the people that make up their company. They say, "Our people make the difference" thus coining their catchphrase Outrageous Sanders Service. The Sanders family is looking forward to a future of continued growth and progress. The Sanders family tradition continues... 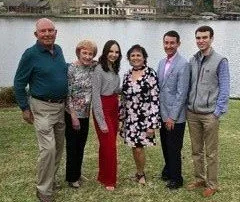